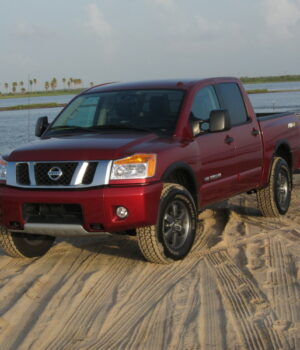 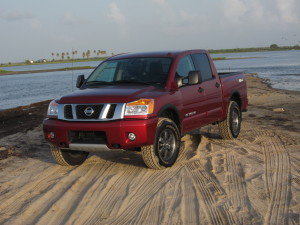 article and images by michael a. marrs

The full-size truck segment is a crowded place, with several manufacturers having multiple entries across a broad spectrum of trim levels for work or passenger comfort, as well as load capacities in weight as well as cargo size. There is also the towing consideration, how big of a load as it relates to suspension and to the engine transmission performance. In most cases, these vehicles are in service every day, whether that be on the job site or running the kids to school, which often makes the creature comforts of more importance than the work capabilities of the truck. Basically the ride, the a/c, and the audio system may outweigh the ability to tow a large trailer fully loaded. It is this segment that the 2014 Nissan Titan 4×4 PRO-4X can be found.

There are two cab designs available with the Titan, the King cab is the smaller version with the half-doors and the much larger Crew Cab has the wide swinging doors for easy access to the rear passenger seat. The King cab is available in four trim levels on the 2014 Nissan Titan starting with the base model S, followed by the SV, then what is often considered the top of the line SL, and the rugged off-road oriented Pro-4X.

As with the competition, there is a V8 engine under the hood that will provide more than enough power for everyday use, but in the Titan, it is backed by a five-speed automatic transmission that has an impact on fuel economy. The Titan 4×4 PRO-4XWith a new design pending next year, it is what it is. With this power combination under the hood, when properly equipped, the Titan is rated for a 9,500 pound towing capacity. 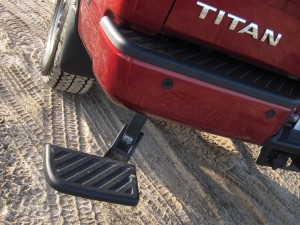 Stepping up to the rugged looking Titan PRO-4x brings in the off-road look 18-inch dark finish aluminum wheels with larger bumpers and graphics on a red and black color scheme. The bed has a flexible cargo management system, as well as a slow drop tail gate.  There is also a nice pullout step to make access to the bed area much easier.

The interior of the Titan PRO-4X maintains the same clean and functional look that may be expected in an off-road vehicle. There is a set of leather heated Captain’s chairs with large white stitching up front along with a folding 60/40 bench seat for the rear passengers that all have the PRO-4X logo on the back. Along with the available Nissan Navigation System showing on the 5.8-inch screen, there is a rear view monitor working with a rear sonar system to minimize any backing impacts.  The standard 8-speaker audio system was upgraded in the review vehicle to a truly awesome sounding Rockford Fosgate Premium Audio System with 10-speakers that includes a subwoofer and a center speaker. Other PRO-4X package features include the white face gauges, Power adjustable pedals, and the tailgate area lighting with a 120V outlet in the bed.

The Titan PRO-4X is a 4×4 that can manage off-road activities as well as be on-road without the driver or passengers taking a beating. The Rancho Shocks will dampen the ride of the 18-inch tires that are part of a factory off-road system that includes skid plates, 2-speed transfer case that includes 4HI and 4LP, electronic locking rear differential, and the 3.35 gearing that is part of the Tow/Haul mode on the review vehicle.  The steering is a light touch allowing the driver experience in the Titan to be similar to a smaller vehicle. 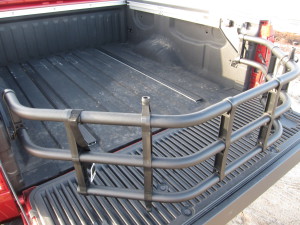 For more information on the 2014 Nissan Titan PRO-4x, visit your local Nissan dealer or online at www.nissanusa.com