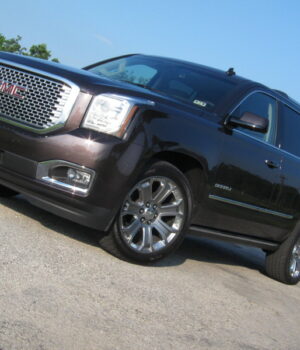 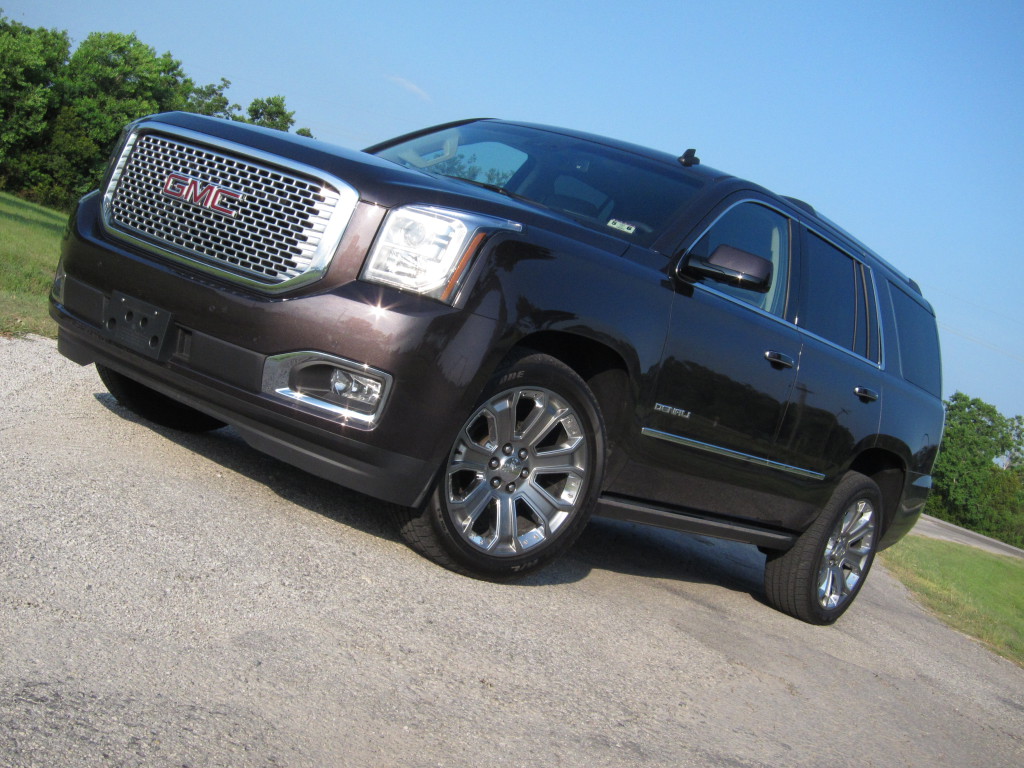 When it comes to a full size SUV, there are several variations on the market that will take on the active family life style with room for up to eight passengers, cargo space for family vacation luggage, and even tow a boat or RV without slowing down due to the power under the hood.  These can be equipped for off-road with skid plates under a 4×4 setup or they can be equipped to primarily be a tow vehicle.  For most large SUV buyers, there is a middle ground that is a well equipped and stylish vehicle, and then there is the segment of consumers that are looking for more luxury.  To fill that need, GM has long been using the Yukon and when more is more, the Yukon Denali. For 2015, the Yukon Denali is all new from the chrome mesh front grill treatment that includes HID headlamps and fog new fog lamps down the long body lines that blend in the side mirrors on the way to the new taillights.

Under the hood, there are actually two engines available for the GMC Yukon, with the 5.3L V8 carrying the load, while stepping up to the Yukon Denali package brings in the 6.2L V8 with a significant boost in available horsepower.  Both engines are backed by a 6-speed automatic.  The review vehicle is equipeed with 4WD, which carries an EPA fuel economy rate that only has the much larger V8 taking a 1-mpg hit with a 4WD city rating of 14 mpg and 21 mpg on the highway.

It is on the interior that the Yukon Denali has excelled in the large SUV segment, and the 2015 seems to take that to a new level.  Along with the expected mix of luxury materials that includes real poplar wood trim and aluminum accents, the front seats are wide and welcoming.  The dash has a familiar, yet new look with a large monitor as part of the gauge pod that may be forgotten with the available heads up display that provides a significant amount of information.  There is also a large touch screen monitor at the top of the center stack that seems to be more responsive and user friendly when operating the navigation system as well as the various infotainment systems that can include wireless DVD headsets and Bluetooth audio inputs.  The second row seat can also be a set of captain’s chairs, but if more seating is needed, there is a bench seat option that might hinder access to the third row seat that will fold into the floor as part of the 2015 upgrade.

From the driver’s space, the 2015 Yukon Denali 4WD responds smoothly to the accelerator, with the 6.2L engine easily moving the SUV at highway speeds on Interstate 10…and beyond.  The magnetic ride control works remarkably like the Cadillac Cousins that have shock absorbers that adjust remarkably fast to the road conditions.  This allows the full-size SUV to feel like a smaller vehicle in a large way.

With a base price nearing $63,000, the Yukon Denali has never been for the faint of wallet, and the 2015 does see a price increase.  The 2015 Yukon Denali 4WD review vehicle started at $65,680 very nicely equipped.  Adding in the Touring Package that includes the Heads-up display, then the automatic running boards, adaptive cruise control, and the nice 22-inch aluminum wheels that are wrapped in a lot of rubber brought the MSRP to $72,215.00 with destination charges.

For more information on the 2015 Yukon Denali – 4WD visit your local GMC dealer or online at www.gmc.com