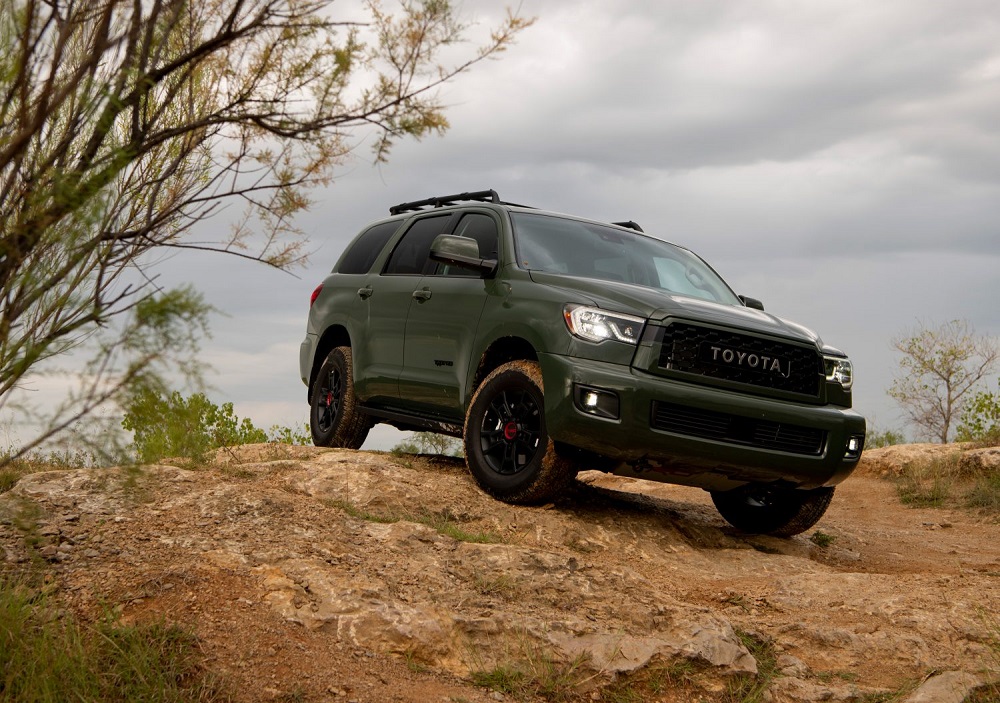 With the current version dating back to 2008, it is no spring chicken in the eyes of many.  But with its enduring robust body-on-frame construction, four-wheel independent suspension, generous ground clearance and 381-horsepower 5.7-liter i-FORCE V8 engine, the Sequoia is still one of the most capable full-size SUVs on the market.

We have long been a fan of Sequoia which is now mature like we are.  So the folks at Toyota sent us the new TRD Pro for evaluation in and around Central Texas to see what we thought.

The “Cliff Notes” version is we continue to be a fan. 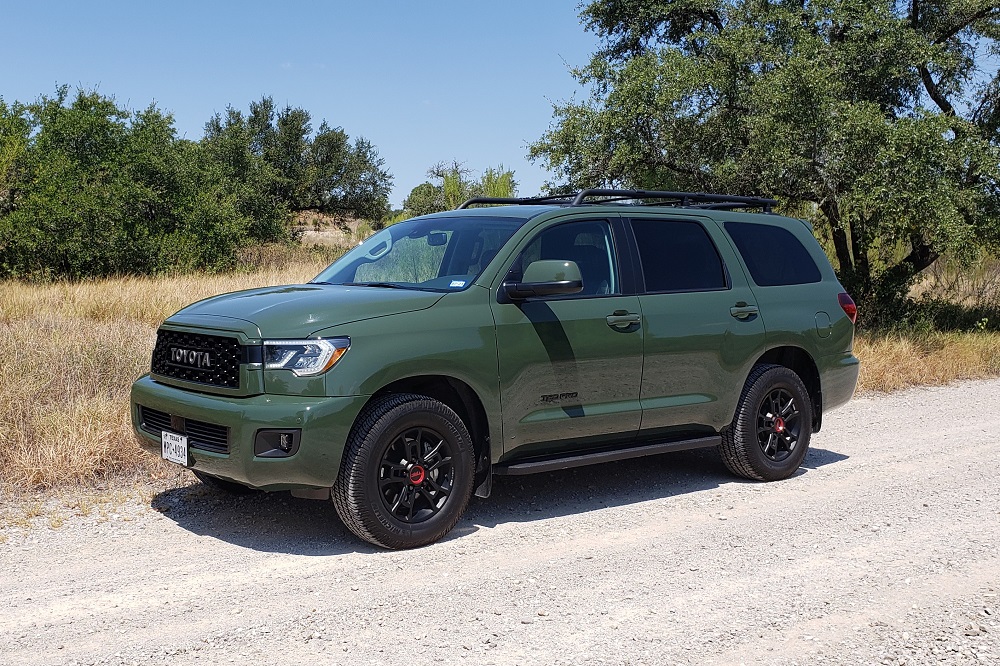 The  2020 Sequoia TRD Pro (based on the premium Limited) comes ready with all you expect in a premium full-size – off-road capable – SUV. There are no packages and just a few minimal exterior and interior accessory items offered.

The MSRP is $64,030. With a couple small extras and delivery, our Sequoia TRD Pro ‘rumbled’ into our drive for $65,624. Our test Sequoia came in their unique Army Green with Black interior.  We found this color eye catching on a vehicle this size, receiving many favorable comments both around town and on the highway.

OF NOTE: If you want one in Army Green, get in now.  Regrettably, Toyota has announced it will not be offered for 2021. Their new Lunar Rock color will grace the exterior of Sequoia instead.  In our opinion, a good choice. Check our piece on the 2020 RAV4 TRD Off-Road for pictures.

Let’s take a look at some of the overall features of Sequoia plus those that make this Sequoia a TRD Pro. 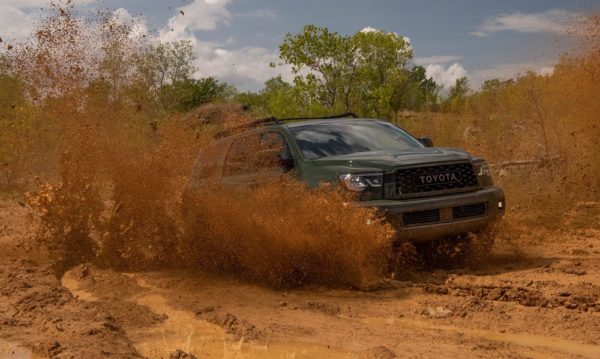 The Sequoia TRD Pro is ably powered by the 5.7-liter i-FORCE V8, which is standard across all Sequoia grade levels.  Producing 381 horsepower at 5,600 rpm and 401 lb.-ft. of torque at 3,600 rpm, it is paired with a 6-speed electronically controlled automatic transmission featuring Sequential Shift Mode w/Uphill-Downhill Shift Logic and Tow/Haul Mode.

This hefty V8 uses only regular-grade gasoline, which is good thing as fuel efficiency is not its strong suit. But where it is short there, a Sequoia makes it up in comfort, convenience and capability.  Rated at 13/17/14 mpg city/highway/combined, its 26.4-gallon fuel tank will take you nearly 450 miles down the road before needing to tank up.

Notably, the low-end torque is a strong suit.   Producing 90 percent of its peak torque at a low 2,200 rpm – good for towing and outback trekking – the Sequoia can tow up to 7,100 lbs. Sequoia features an integrated tow hitch, driver-selectable Tow/Haul transmission mode and Trailer Sway Control.

The Multi-Mode 4WD system on TRD Pro uses a lockable TORSEN limited-slip center differential to apportion torque to the front and rear wheels, and a two-speed transfer case provides a low range ratio for tackling steep off-road trails. Low range is accessible on the fly via a rotary knob, and the driver can lock the center differential with the push of a button.

Sequoia offers ample comfort and room for hauling up to seven plus all their gear for all manner of adventuring.

The 2020 Sequoia TRD Pro is available only as a 7-seat model, featuring middle-row captain’s chairs and a three-across third-row seat with 60/40 split backs that also recline. 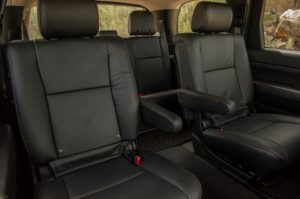 The independent rear suspension plays a large part in allowing for the third row’s roominess, which offers adult-size legroom (35.1 in.). Second-row legroom is full-size sedan-like at 40.9 inches. With easy access second row and recline feature in the third row, Sequoia TRD Pro is a great people hauler.

Hauling gear, Sequoia also has the room. With both third-row seat backs folded flat, there’s 66.6 cu. ft. of carrying space, enough to haul camping gear for four. With the second-row seatbacks also folded, the space increases to a cavernous 120.1 cu. ft., enough for a very long camping trip for two. 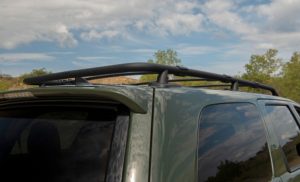 And don’t forget the roof rack.

OF NOTE:  Sequoia has Power Rear Window in the liftback that very handy for loading and unloading without having to open the liftback.

In the Army Green, we could never lose our 2020 Toyota Sequoia TRD Pro in the parking lot of any big box store – or anywhere for that matter. 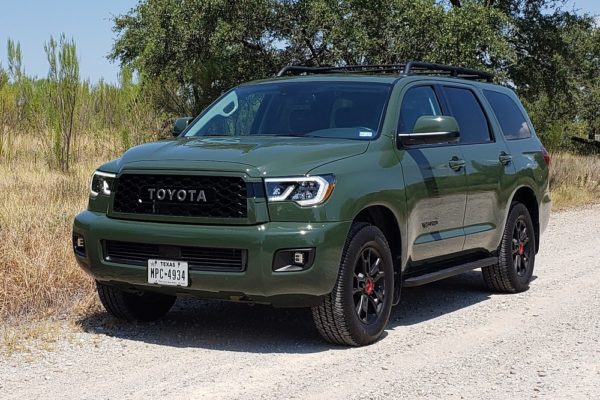 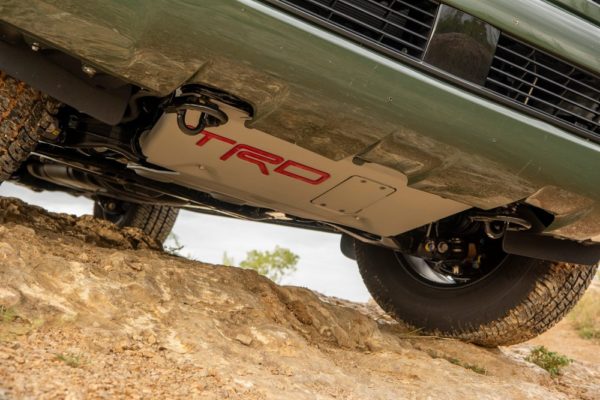 TRD Pro is of course much more than a tough look. TRD engineers went through the Sequoia chassis and made it even more capable for the outdoors. 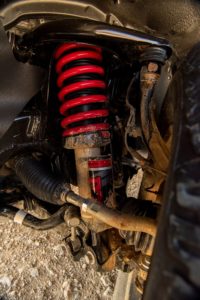 At the rear, are 2-inch-diameter Fox piggyback monotube shocks that feature bottom-out-control technology, which is designed to increase damping force for improved bottoming resistance.

Our Sequoia TRD Pro was equipped with a TRD cat-back exhaust, featuring a single outlet with a black chrome tip and TRD debossed logo. The system produces a bolder exhaust note that TRD engineers designed with a frequency-tuned sound cancellation device to improve in-cabin sound quality. 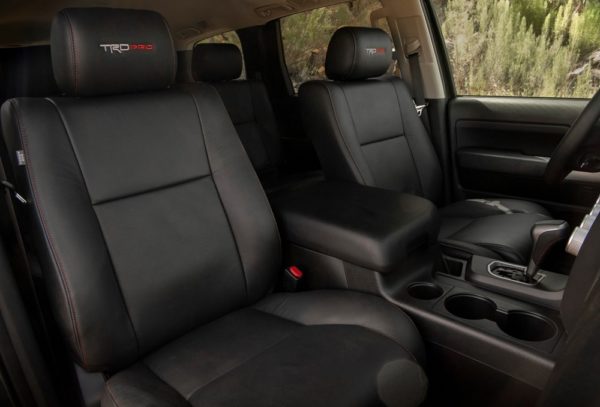 The Sequoia TRD Pro comes standard with JBL Premium Audio with Dynamic Navigation and Clari-FI. It has 14 speakers, including subwoofer and amplifier. 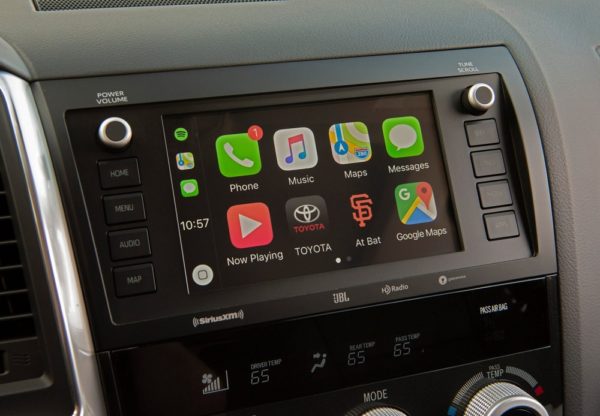 OF NOTE: The touchscreen on Sequoia is just seven-inches. Don’t sell it short. The screen resolution and font styles make it seem much bigger.

In addition to the TRD Pro, the Sequoia lineup includes the SR5, TRD Sport, Limited and Platinum grades in two-wheel drive or Multi-Mode 4WD 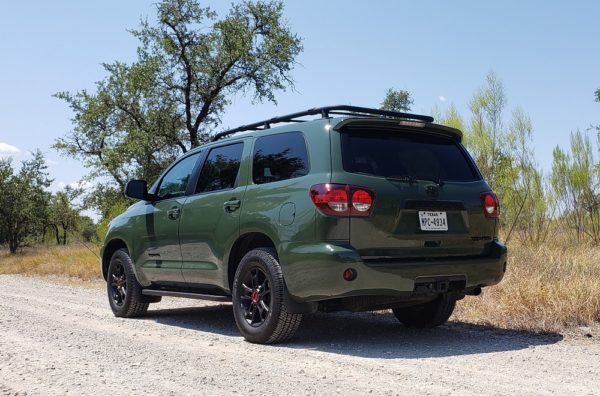 Learn more about all of the 2020 Toyota Sequoia full-size SUV’s HERE.

Other Articles of Interest