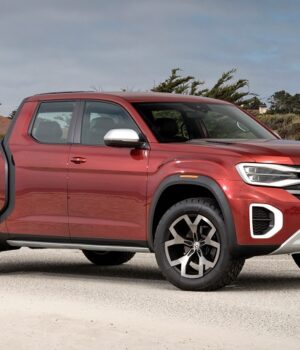 As the truck market in the U.S. continues its expansion, the folks at Volkswagen are edging closer to a decision to produce their Atlas Tanoak Concept mid-size truck for America.

The Atlas Tanoak Concept is appearing at Monterrey Car Week in Pebble Beach, California this month.  Showing also is its SUV sibling – the Atlas Cross Sport – which has just been moved from concept to production status in 2019.

Sources tell us that after showing Atlas Tanoak Concept at New York to admiring East Coast audiences, Volkswagen is very interested to get the reactions of West Coast buyers and media.

Demonstrating the flexibility of their variable modular transverse matrix (MQB) platform, the Atlas Tanoak would be their first pickup truck based on the architecture.  Like its Atlas three-row SUV sibling, it would be powered by a 276-horsepower V6 FSI gasoline engine mated to an eight-speed automatic transmission and equipped with the VW 4MOTION all-wheel-drive system with Active Control. 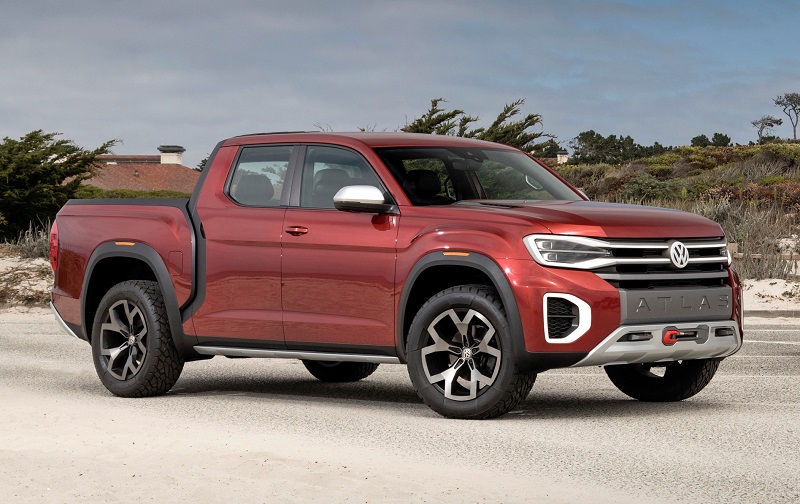 Designed as a dual-cab, five-seat truck, the Tanoak concept is 15.8-inches longer than the Atlas, putting it at the larger end of the U.S. midsize pickup segment.  The body of the Tanoak is raised nearly 2 inches compared to the Atlas SUV, giving it a ground clearance of 9.8 inches.

Its cargo bed is large at 64.1-inches long and 57.1-inches wide with 50.4-inches between the wheel wells. It is well-suited for transport of cargo such as bikes or surfboards with the tailgate in place, and ATVs and dirt bikes with the tailgate down. The full-size spare wheel is located under the cargo bed, making it accessible even when fully loaded.

VW points out a unique feature of the cargo bed is a rail that is mounted on the pickup bed. Normally fixed by the back of the cab, but it can slide the length of the bed and doubling as a carrier above the bed for items like canoes and ladders. 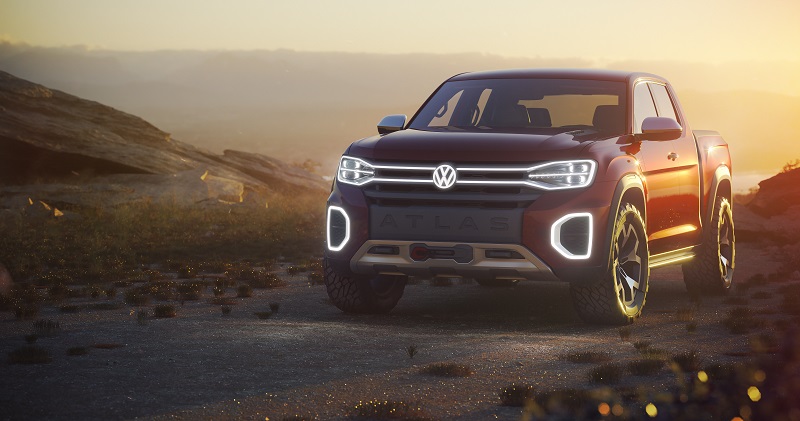 The Atlas Tanoak concept uses the Volkswagen 3.6-liter V6 engine (same as the Atlas 3-row SUV) producing 276 horsepower and 266 pound-feet of torque. The engine provides power to the wheels via an eight-speed automatic transmission and the 4MOTION all-wheel-drive system with Active Control. This lets the driver select from various on- and off-road modes within seconds for optimal grip on dry, wet, slick or unpaved surfaces.

For tougher off-road use, the pickup also has a mode that provides a low-range gear reduction. 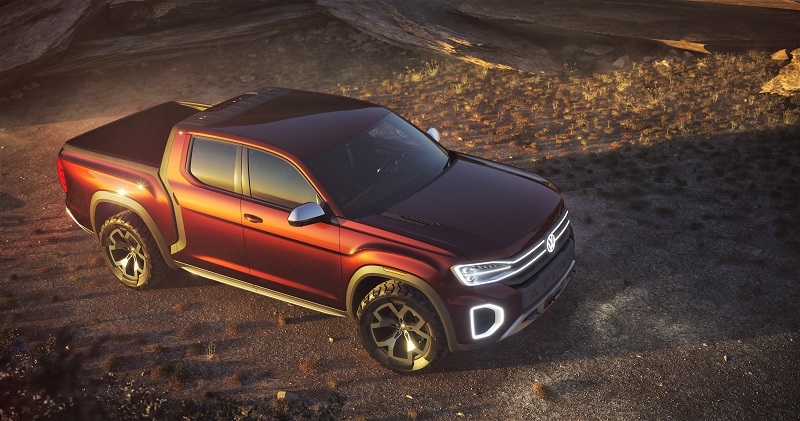 The Atlas Tanoak is based on the production SUV, but as a pickup, has significant styling differences.

Up to the B- pillar, there are similarities to the Atlas SUV, with the frontal treatment more rugged, in keeping with a pickup truck’s mission. The redesigned headlights and front bumper, using round LED Daytime Running Lights (DRLs), extend into the side profile.

The Atlas logo, integrated into the front end, features an animated lighting display. When the Atlas Tanoak is opened, the white VW logo gradually brightens. From there, the white light runs over the two crossbars of the grille and into the headlight surrounds. As soon as activation of the lighting strips has reached the headlights, the LEDs of the two strips in front briefly ‘swipe’ out from the logo and back until the LED headlights and distinctive, narrow, six-sided LED DRLs in the bumper activate.

Additional redesigned components include: the engine hood that is significantly raised in middle; the entire grille unit including LED headlights; and the bumper. Very rugged underbody protection that integrates a centrally mounted winch and carabiner are also featured. 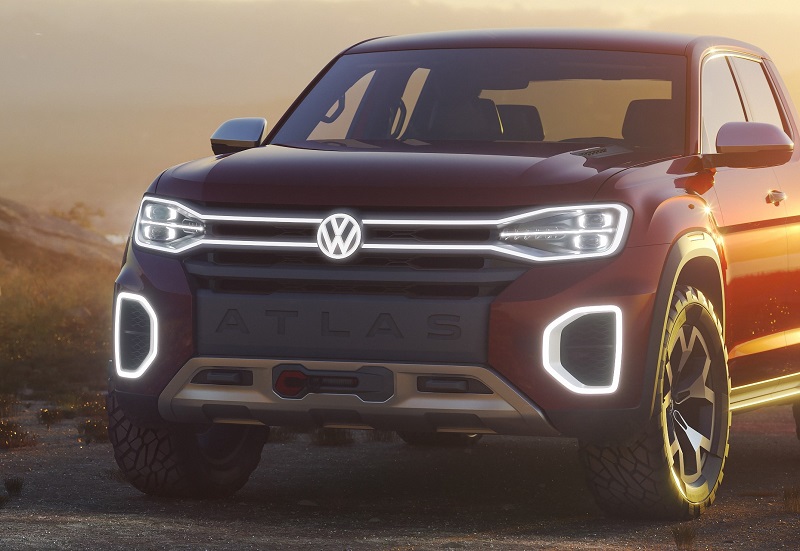 From the B-pillar back, the Tanoak design differs significantly from the Atlas SUV.

The handles of the rear doors of the dual cab are not very noticeable at first glance being integrated – and nearly hidden – in the C-pillars. The dual cab and its window surfaces emphasize the vehicle’s length while its ruggedness is emphasized by the strongly flared surfaces of the rear fenders.

As a pickup, the rear of the Tanoak is defined by its low-hinged tailgate. When lowered the cargo bed is lengthened an additional 26.1 inches, extending it to 90.2 inches. 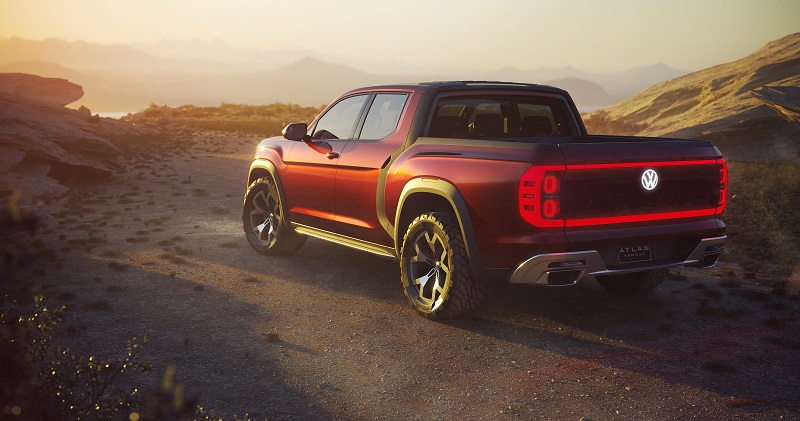 The Atlas logo is also integrated into the tailgate, accented by distinctive wrap-around, animated lighting. Red LED strips on the upper and lower areas of the tailgate transition into three-dimensional LED taillights on the sides. The VW logo is illuminated in white, and there is a white LED stripe in the cargo bed rail, which, when activated, illuminates the cargo bed.

The lower part of the rear body is designed both as an underbody shield and a diffuser. Above each exhaust tailpipe sits a rugged tow hook.

Other special design features for the pickup include wheel arch extensions, made from rugged plastic that incorporate integrated side marker lights, and the high-gloss 20-inch wheels in contrasting aluminum and black coloring – clad with 275/55 tires. 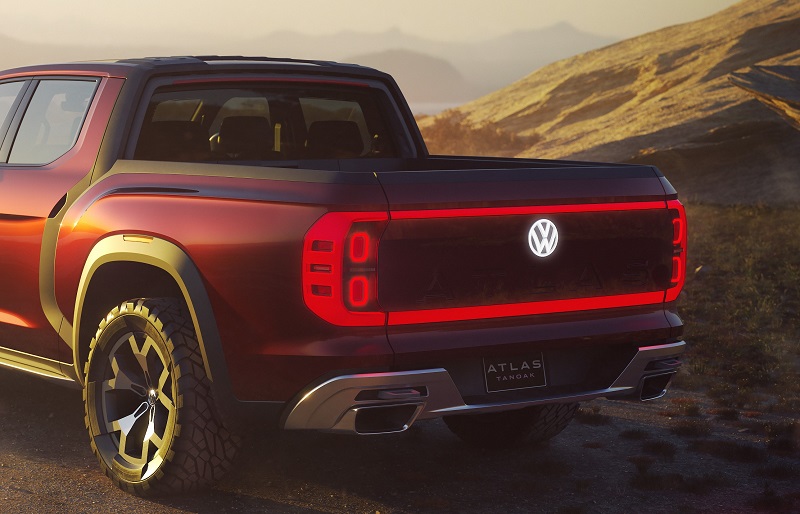 The Atlas Tanoak concept is a spacious five-seater with its extra length.  Sporty, contoured seats are used in front, offering very good lateral support for highway, around town of off the road.  Rear seating is similarly designed with passengers sitting on individual seats that match the ergonomic and design quality of the front row.

The instruments clusters, center stack console, and multifunction steering wheel are majorly different that than the Atlas SUV.  The touchscreen infotainment system is positioned high up for easy operation, almost alongside the Volkswagen Digital Cockpit. Both these screens and the controls for the air conditioning merge to form a digitalized cockpit environment. 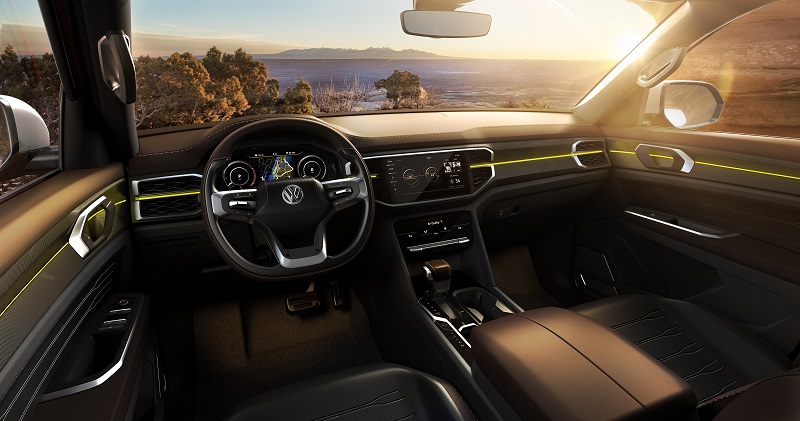 Ambient lighting integrated into the instrument panel and the roofline console immerse the interior in yellow or blue light at night, depending on whether the vehicle is in Off-road or City mode.

The new design shifter grip for the eight-speed automatic transmission and the redesigned 4MOTION with Active Control, with mode selection via a metallic slider are located on the center console between the driver and front passenger.  VW has paid close attention to the ‘work’ function of a pickup truck – well constructed and spaced for easy use, even with gloved hands. 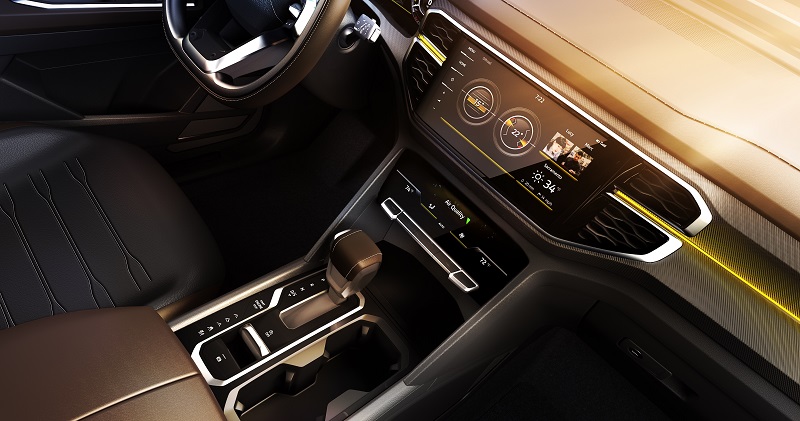 With its second exposure to the public and media at Pebble Beach this month, we predict VW will show a ‘production-ready’ version of the Atlas Tanoak – perhaps as early as the end of 2018 or early 2019 with a possible market debut in 2020.

Stay tuned for developing news on the future of the VW Atlas Tanoak pickup truck right here at inwheeltime.com.

In Wheel Time has more on the VW Atlas