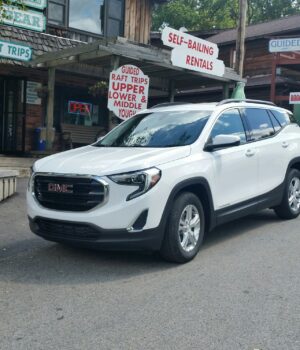 Shortly after spending a full week with the all-new 2018 Chevy Equinox compact SUV (see our August 24 review of Equinox) we had the opportunity to test drive its premium sibling from GMC – the 2018 GMC Terrain – during a recent trip to the Pittsburgh area.+ 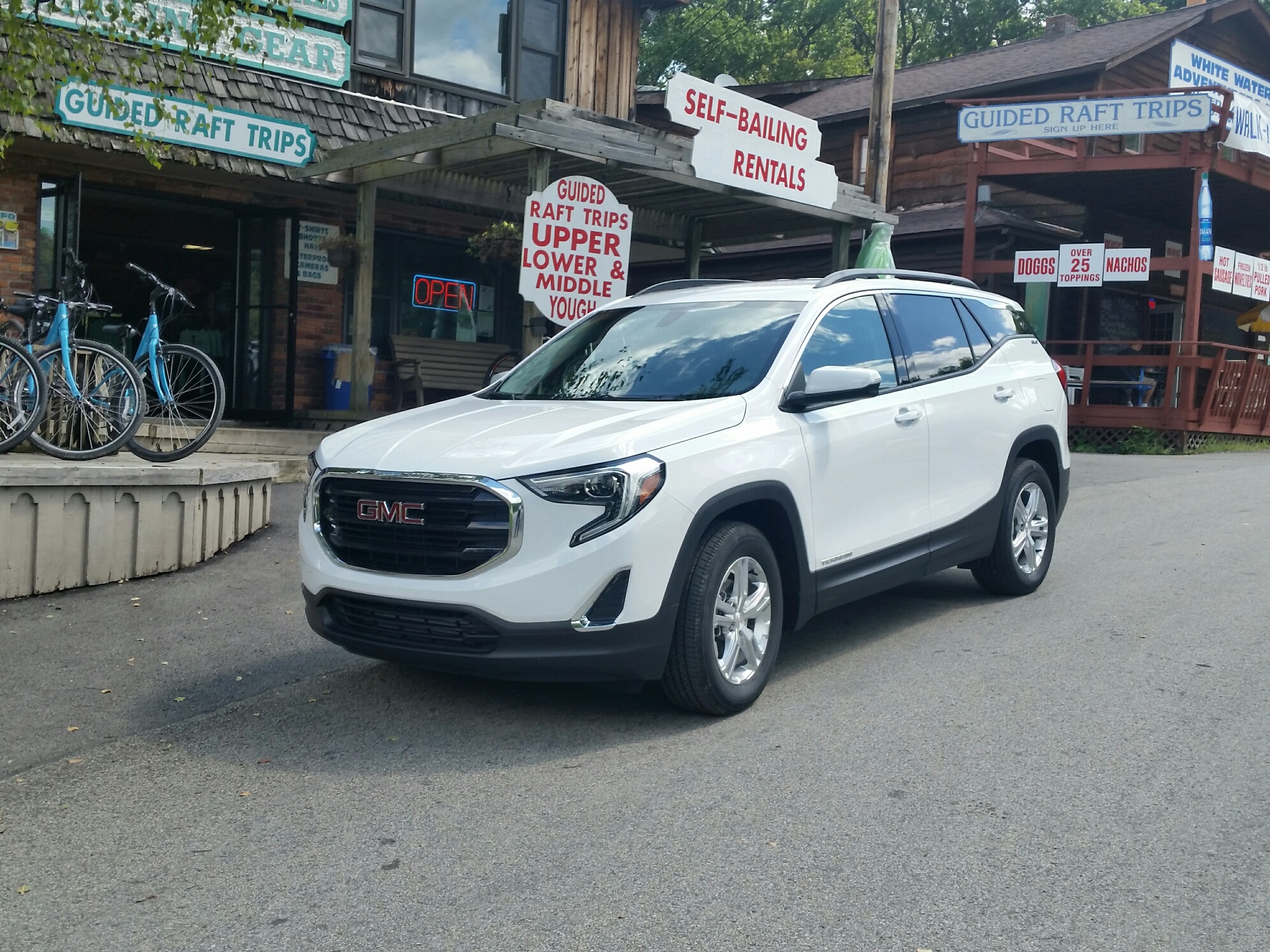 Similar to Equinox, the 2018 GMC Terrain – compared to its predecessor – has kept its generous interior space while trimming length by 3.5-inches, height by an inch and weight by about 400 pounds.  Importantly for driving, the new Terrain sports a 5.2-inch shorter wheelbase that, with the other changes – make it more nimble and exciting to drive.

On the outside, the often criticized previous Terrain ‘box’ look is gone.  The sharp and boxy edges have been subtly softened to deliver a sleeker, yet still muscular profile.  The fenders and grille are actually a bit bigger and tougher looking, but the addition of bright trim elements with carefully crafted blackout elements give it a stylish urban flair. 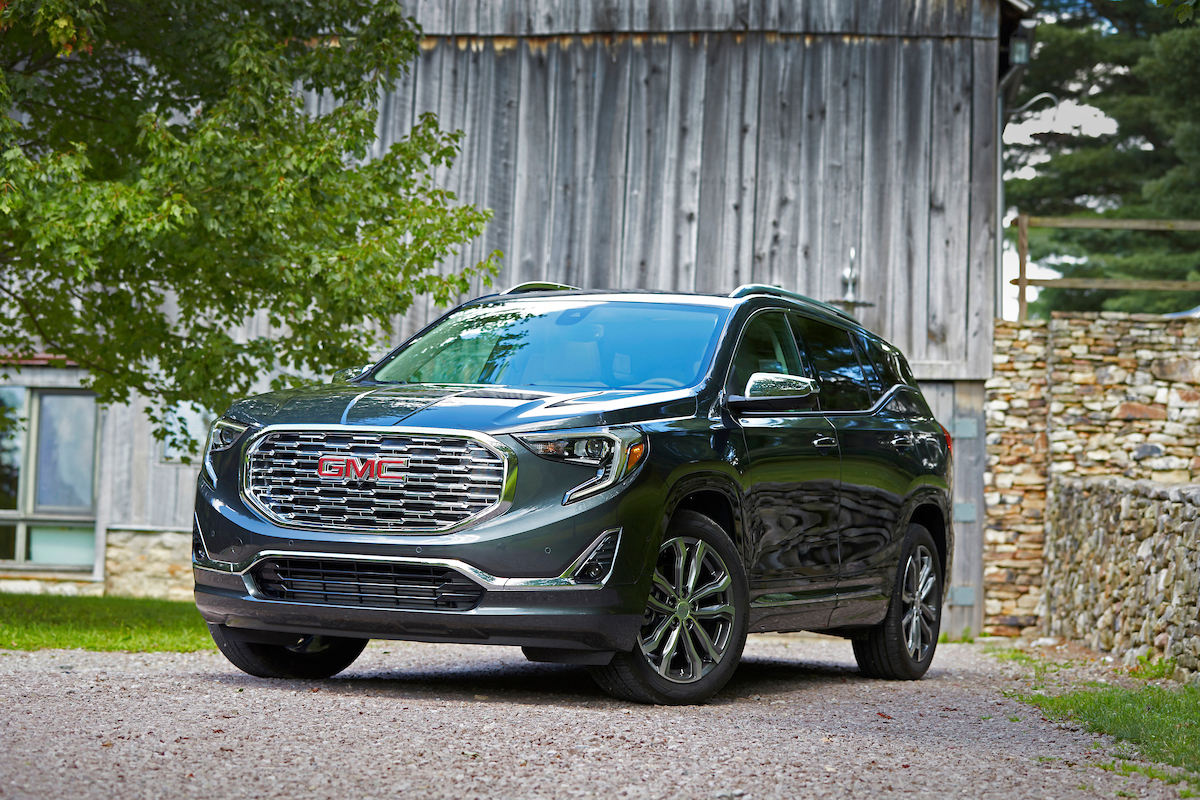 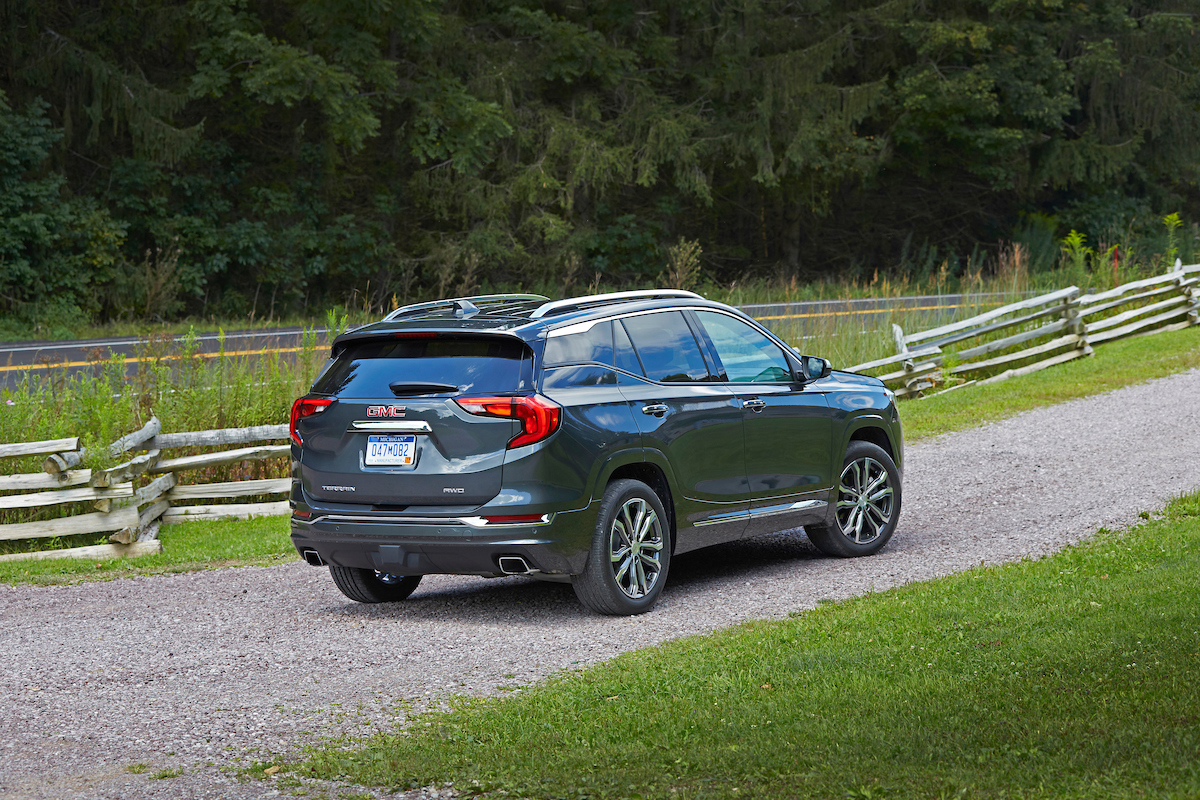 Inside Terrain, improved convenience and comfort features abound surrounded by upscale styling, premium finishes and accents in an extremely comfortable and notably quiet cabin equipped with the latest technology standard or available.

As we found with the Equinox, the new 2018 GMC Terrain has now finds it place – in this case – standing out at the premium end of the compact SUV segment.

The 2018 Terrain offers three turbo power trains (including a new diesel) available across all trims except the base SL.  There are a host of reasons to love the new 2018 GMC Terrain including the new size and styling, the all-turbo engine options including diesel; the nine-speed automatic transmission and latest technology features standard or available.

We have singled out three features that notably impressed us – as they should you – and described them below. 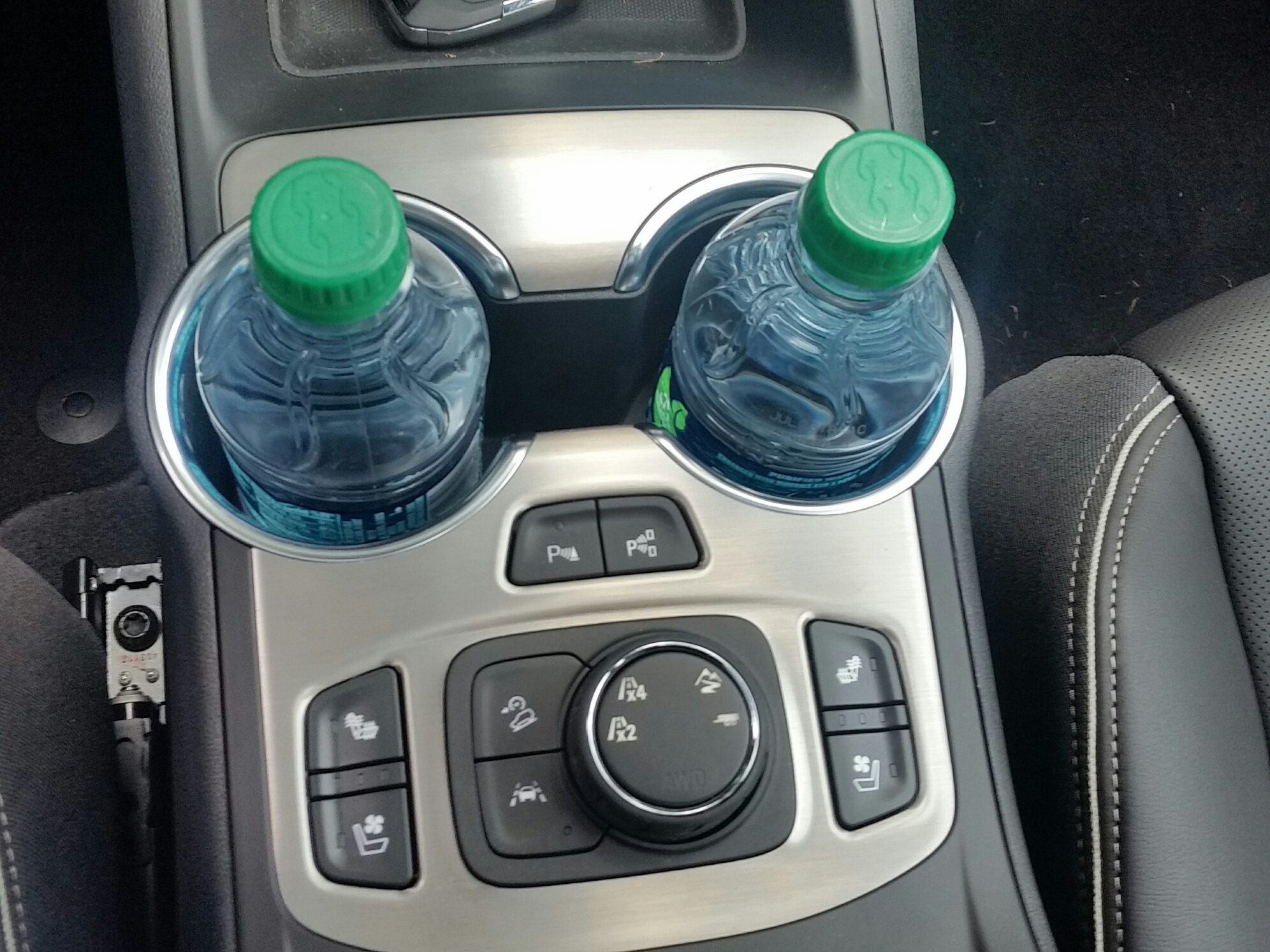 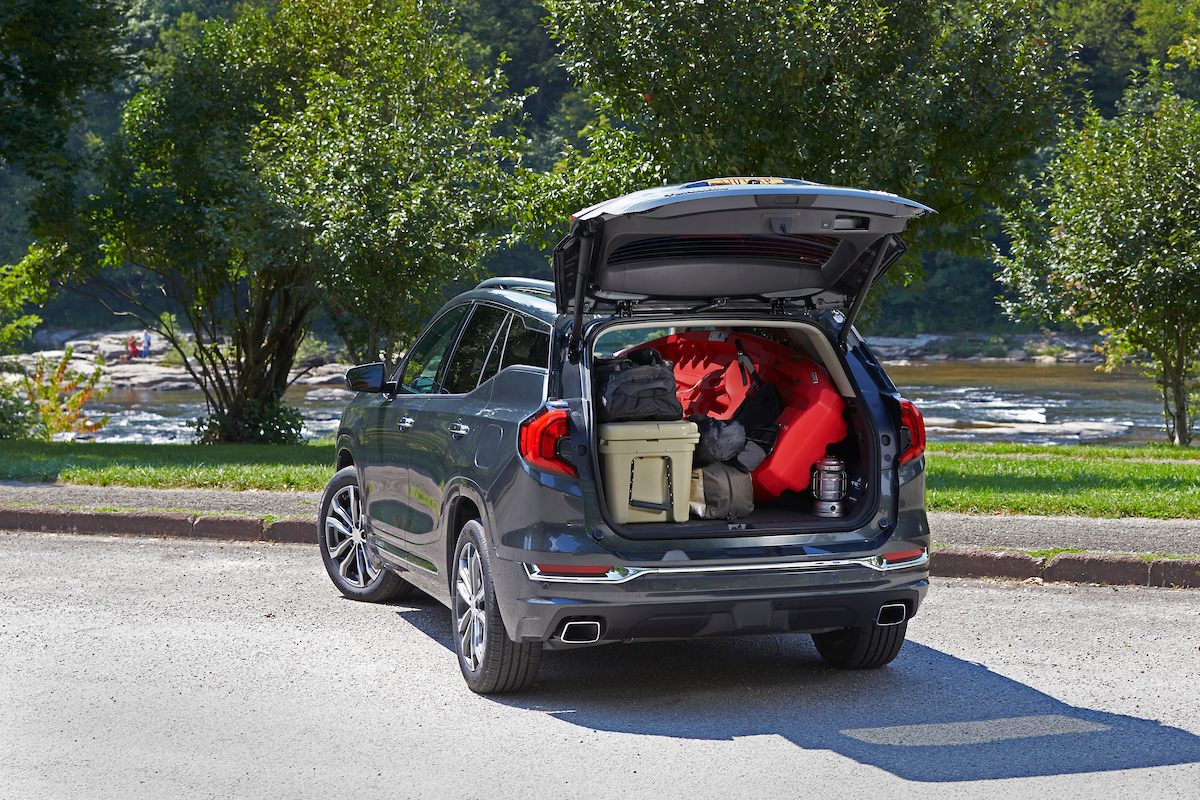 GMC introduces their new Electronic Precision Shift (EPS) system on the new 2018 Terrain.  GM designers have replaced the traditional mechanical linkage shifter with a new innovative ‘shift-by-wire’ system that offers precise and positive shifting beyond the rotary shifter that others have adopted.

A series of push/pull switches are within easy view and reach of the driver.  Push switches include Park and Neutral.  Pull Switches (with indicator lighting) are used for Drive and Reverse.  For safety, the driver must press the brake pedal to shift out of Park.  Shifting into Park cannot happen over 3 mph and shifting into Reverse cannot happen with vehicle moving over 6 mph. Lastly, if the driver shuts off the engine while the vehicle is in Drive or Reverse, it shifts itself automatically into Park to prevent roll-away.

The new EPS system is now mounted at the bottom of the center stack opening up valuable space on and in the console. This has enabled GMC to improve the storage and functional utility of the console including new pass-through storage underneath.

In particular, we noted the more convenient (forward) side-by-side placement of the cup holders and the more accessible accommodation of the AWD Traction Select system and other convenience controls.

Three Powertrains – all turbos including a diesel

The GMC Terrain offers the same three turbo-charged engine choices found in its sibling Chevy Equinox with one significant change.

GMC has improved the performance of the standard 1.5L turbocharged 4-cylinder engine (170 horsepower and 203 lb.-ft. of torque) measurably by replacing the six-speed automatic used in the sibling Equinox with the new and more efficient GM 9T45 nine-speed automatic transmission in Terrain.

Where we panned the 1.5L powertrain with six-speed in Equinox, we very much like it with the nine-speed in Terrain.   With its 30-mpg highway fuel economy (FWD), we recommend the 1.5L turbo power train for most buyers using it as their everyday driver for city and highway.

The 2.0L turbocharged 4-cylinder engine and nine-speed automatic powertrain is the optional gasoline engine for the Terrain. Its 252 horsepower and 260 lb.-ft. of torque delivers notably sporty performance with very reasonable 28-mpg fuel economy.  In addition to hauling up to five along with their gear, it has plenty of power for towing up to 3,500 pounds – including the likes of the popular new Airstream Basecamp camping trailer.  The 2.0L is available on all trim levels (except SE) for $2,835.

Reasonably priced, the 2.0L powertrain would – in our opinion – be the preferred option for the more adventurous driver and family.

GMC also made available for our drive test their optional new 1.6L turbocharged 4-cylinder diesel engine mated to a 6T45 six-speed automatic transmission.  This engine, built in Italy, produces 137 horsepower with a strong 240 lb.-ft. of torque and is fuel economy rated at an impressive 39 mpg highway.  With its 15.6-gallon fuel tank (AWD) – range for the 2018 Terrain diesel is over 600 miles.

The diesel option is available on all trim levels (except SL) for an upcharge of just $2,845.

We were impressed by the diesel powertrain. Though not as ‘nimble’ off the line as the 2.0L, it delivers solid acceleration and good driving response around town and on the highway.  We found it to be remarkably quiet in the cabin due to extra sound deadening efforts under the hood and on the firewall. Frankly, you have to open the door and get out to hear the distinctive – yet low – diesel rumble.

It should be noted that, where typically the diesel powertrain in a vehicle is the towing option, in the case of the Terrain (and Chevy Equinox) it is not.  Only the 2.0L turbo offers the towing capability.

Setting that aside, we think this option is a good value for those wanting the fuel economy, range and brute power of a diesel in a compact SUV.

Additionally, all engines are equipped with Start/Stop technology for added fuel efficiency.  After driving them all, we can tell you GMC’s version may be the best in the industry – quiet, smooth and fast.

Terrain is equipped with the latest GMC IntelliLink infotainment system with 7-inch screen (8-inch available) that features a new and comprehensive – intuitively easy to use – real time navigation system.  In a real use experience – encountering a major traffic tie-up returning to the airport following the drive test – we learned and used its real time, pinch and zoom, map centering and route option selection capability very effectively.  Each route option was quickly calculated and displayed with route times for our quick evaluation.  At the same time, it kept us posted on time to clear the main route.

We give it a first drive “A” grade for its ease of use and capability plus the sun shade that kept the glare off the high definition display screen.

The new 2018 GMC Terrain will be arriving in dealerships shortly.  For more information or build one for yourself go to http://www.gmc.com/suvs/terrain-small-suv.html 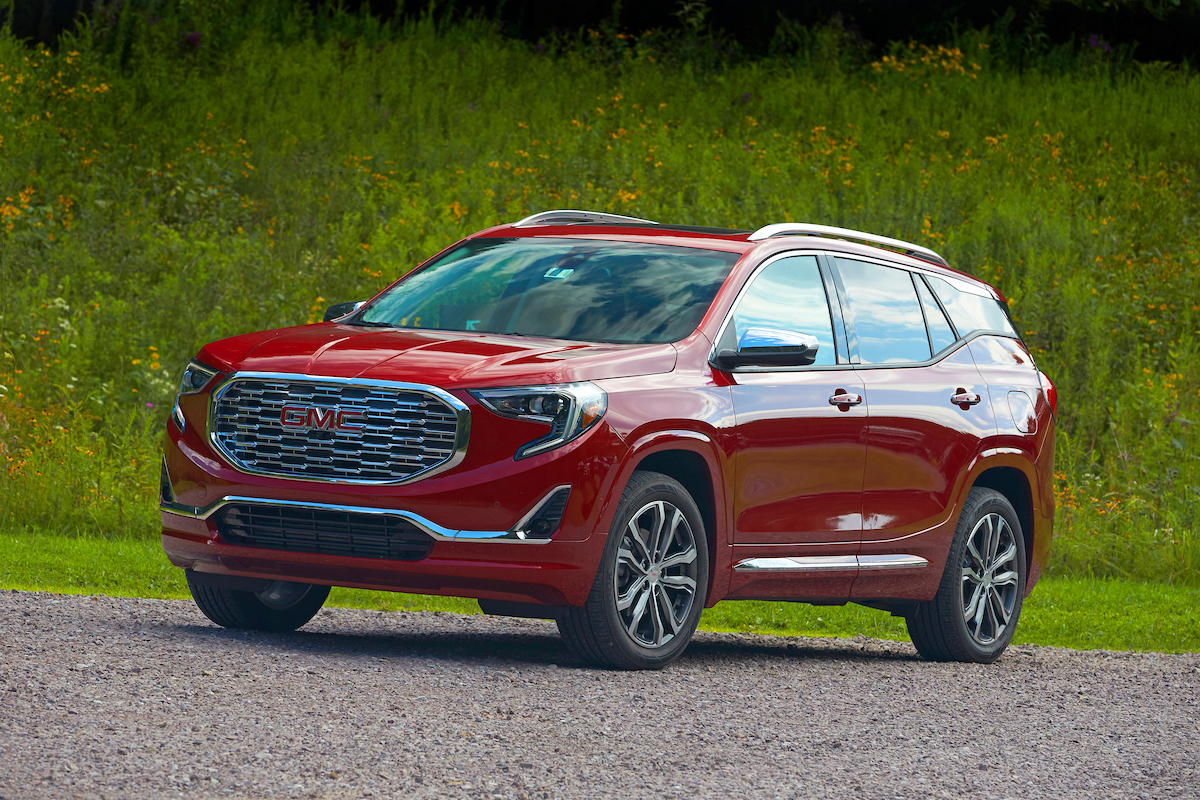