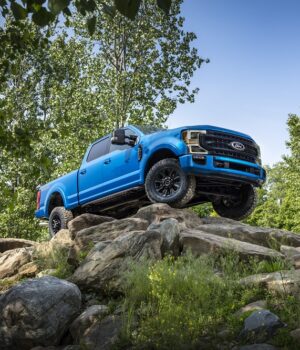 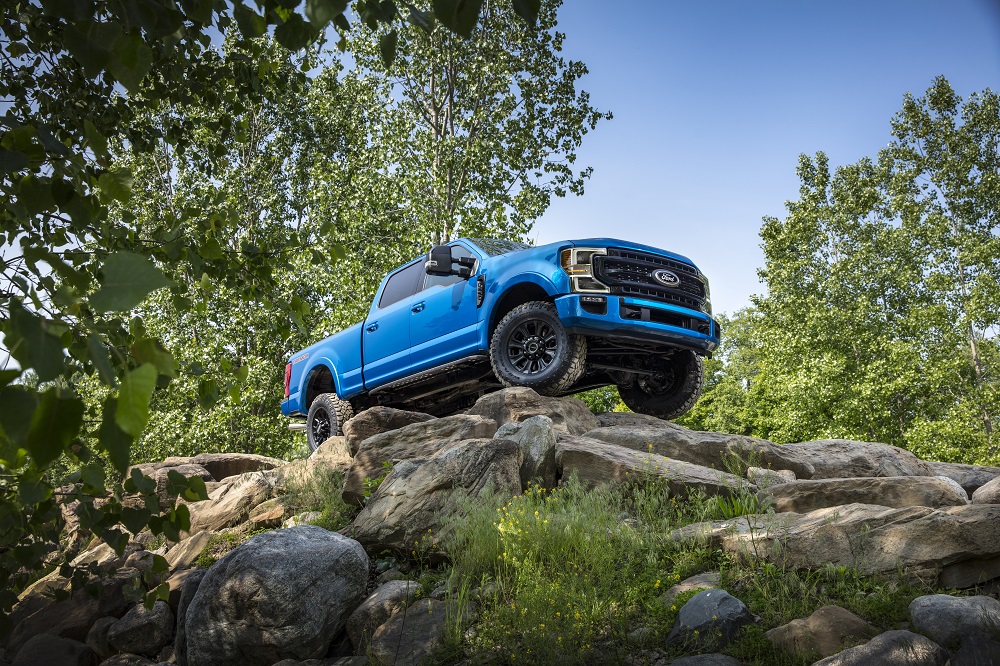 Ford announced today that the 2020 F-Series Super Duty trucks will be able to deliver new ‘crushing’ capability in yet another and all-new way – with a Tremor Off-Road Package.  Taking direct aim at the Ram Power Wagon – also a HD level truck – Ford says that the new Super Duty trucks arriving this Fall will deliver better performance with greater towing and payload than the Ram.

“A growing number of Super Duty customers use their trucks for more than work. They’re fishing, camping and towing boats on weekends and they go off-road, so we designed this truck specifically for them – more ground clearance, bigger shocks, bigger tires and more off-road capability,” said Todd Eckert, Ford truck group marketing manager. “Tremor balances what customers demand in terms of work with what they need in the great outdoors.” 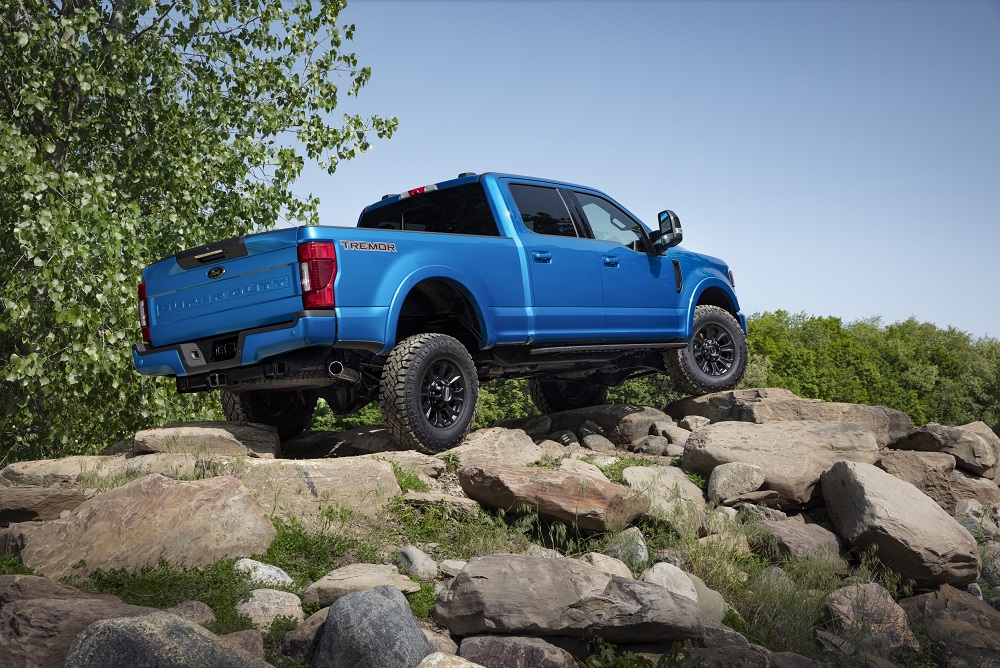 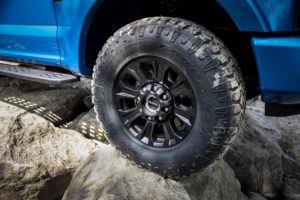 Getting the biggest and ‘baddest’ rubber on the ground is key and Tremor will be so equipped. Tremor will use a set of aggressive 35-inch-diameter Goodyear Wrangler Duratrac maximum-traction tires – the largest diameter tires available on a heavy-duty pickup. They will be mounted on a set of unique 18-inch matte-finished black wheels.

These tires, combined with a 2-inch front-end lift and shorter air dam will deliver serious off-road capability with 8-inches of ground clearance, approach/departure angles of 31.65 and 24.51 degrees respectively (best ever on a Super Duty) plus – what Ford says – is ‘Best in Class water fording of 33-inches. 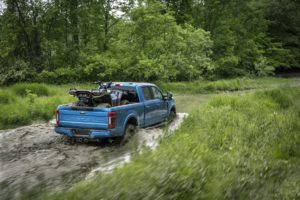 Custom 1.7-inch piston twin-tube dampers will work to control body motion. At very low speeds, they are tuned for soft damping, which is dialed up for control over more severe impacts. Internal hydraulic rebound helps soften the blow of the hardest hits. 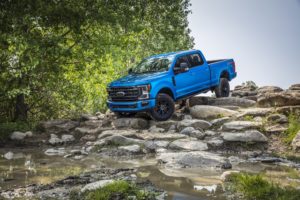 Tremor will use a locking rear differential with electronic shift-on-the-fly engagement and a new Dana limited-slip front differential. In certain modes, the front axle can sense when a tire has lost traction and uses the brakes to send power to the wheel with traction.

Additional hardware includes off-road running boards that tuck up next to the body for damage control, extended-axle vent tubes and the same beefy skid plates as fitted to FX4 models.

The 2020 Super Duty Tremor will feature selectable drive modes.  They will include NORMAL for around-town use, TOW/HAUL to optimize performance under load, ECO to enhance fuel economy, SLIPPERY for icy conditions, and DEEP SNOW/SAND for serious low-traction conditions. 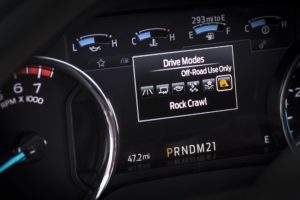 There will also be (unique to Tremor) a new ROCK-CRAWL mode enabled by the standard TorqShift 10-speed automatic transmission and operating  in 4×4 Low.

Crawl ratios for the Tremor will be 53:1 when equipped with the 7.3-liter gas engine and 44:1 for those running the 6.7-liter diesel engine.

Last and certainly not least – the Super Duty will get Trail Control.  This feature was designed for the F-150 Raptor and Ranger mid-size.  Without going into the ‘nuts and bolts’ – it functions in any of the Drive Modes like a cruise control.

The Tremor package will be available on the 2020 F-250 and F-350 Super Duty trucks when they arrive later this year. 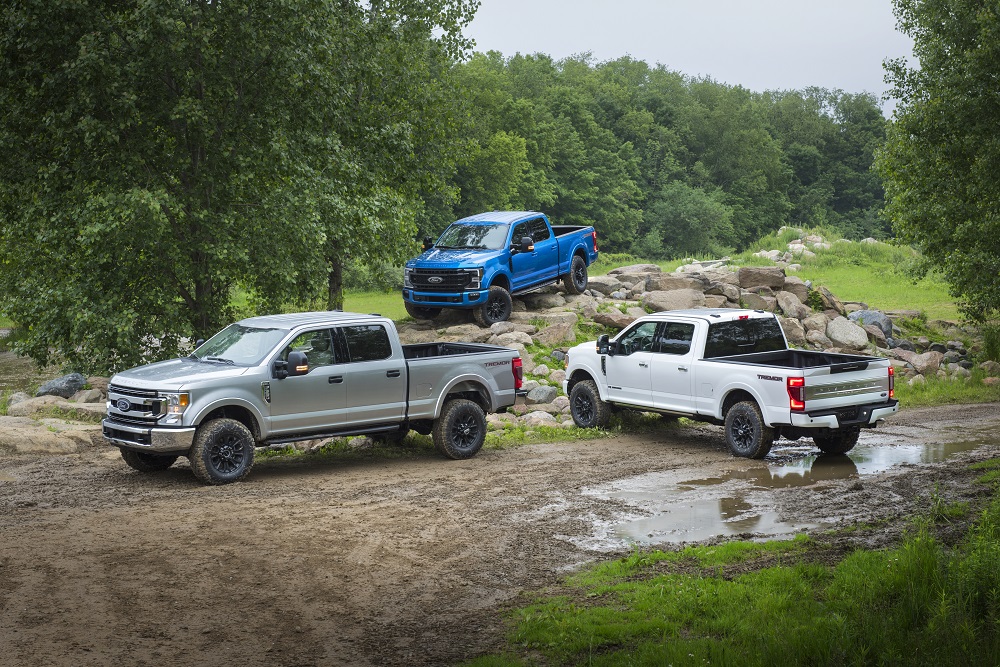 With Ford taking direct aim at the Ram, it needs to be noted that the Ram Power Wagon is a production vehicle – not just a Ram HD with an off-road package.

Not saying that a factory installed Tremor package on a Ford HD will not measure up to the Power Wagon – just noting that the proof will be in the driving.

Plus there is another player – GMC will be joining the HD off-road segment with their new Sierra HD AT4 also expected in the Fall.

A ‘shoot-out’ between the three should be interesting.

Haven’t we seen Tremor before?

If the combination of Tremor and Ford trucks sound familiar to you, it should.

When we get some time behind the wheel of a  Super Duty Tremor, we will give the good, bad and not so bad here at inwheeltime.com.