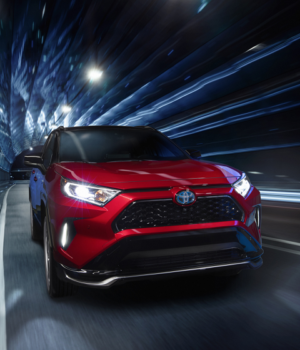 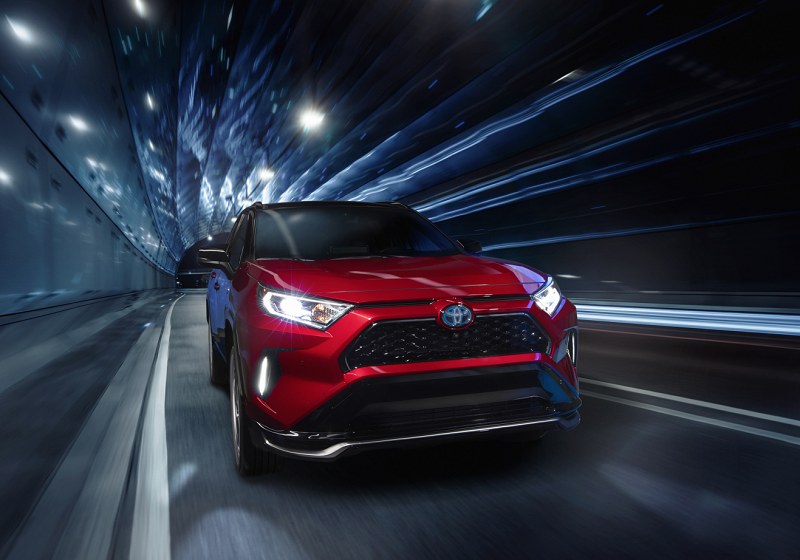 Let us get your attention with a few facts about the new 2021 Toyota RAV4 plug-in hybrid electric vehicle coming in Summer 2020. Simply the most powerful, quickest and fuel efficient RAV4 ever.

Toyota took the wraps off their newest model in the RAV4 lineup at the Los Angeles Auto Show in November.  Already featuring a hybrid in the RAV4 line, Toyota is upping their game significantly with the 2021 RAV4 Prime. The new premium RAV4 plug-in hybrid (PHEV) performance model features an estimated 302-horsepower, advanced all-wheel drive, sport-tuned suspension and exclusive design features, according to Toyota.

Toyota says their first-ever RAV4 plug-in hybrid electric vehicle (PHEV) will do 0-60 mph in 5.8 seconds, drive an estimated 39 miles on battery a single charge and deliver an estimated 90 combined MPGe. 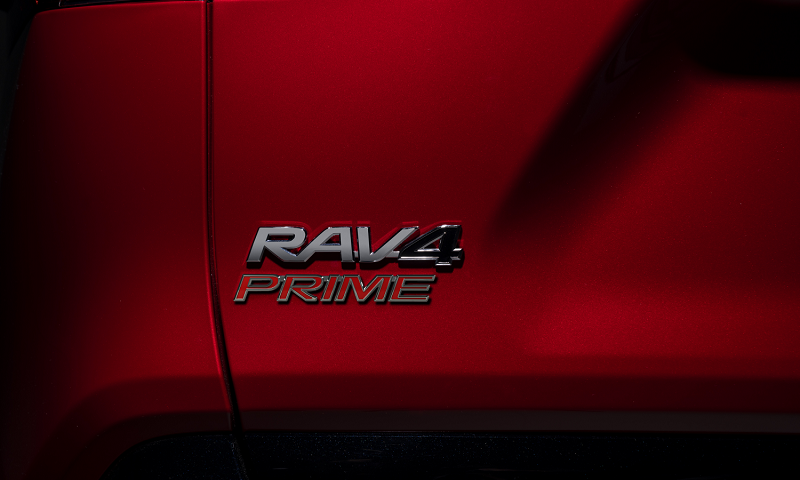 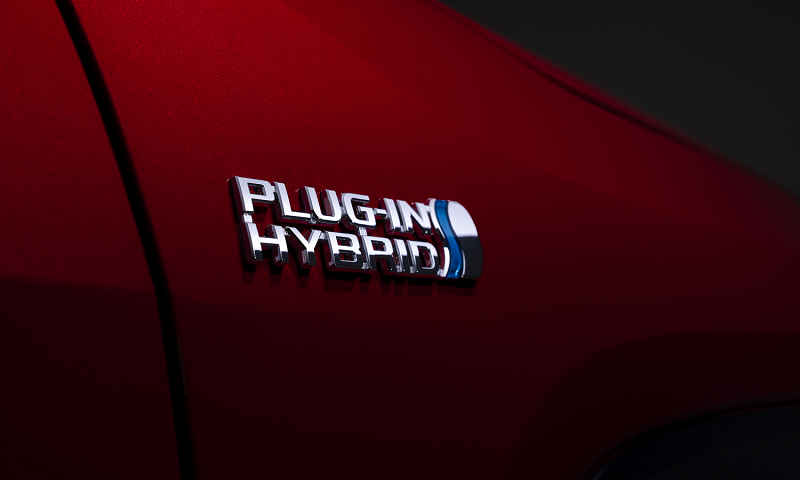 The Toyota RAV4 Prime will be available in SE and XSE grades, both emphasizing athletic on-road performance and premium comfort and style.

The Toyota RAV4 Prime builds on the RAV4 Hybrid, which is currently the most powerful and most fuel- efficient model in the line – currently the best-selling hybrid vehicle on the market.

With more powerful motor-generators, a newly developed high-capacity Lithium-Ion battery and a booster converter, the 2021 RAV4 Prime yields an 83-horsepower (hp) jump in total system output over the RAV4 Hybrid and has the most horsepower in its segment.

The resulting boost in performance is striking: Toyota projects 0-60 mph acceleration in 5.8 seconds which is quicker than the RAV4 Hybrid (7.8 sec.) and ranks well with luxury/performance SUVs that come nowhere near this Toyota’s remarkable fuel economy. Plus it does it on regular grade gas – what little it needs. 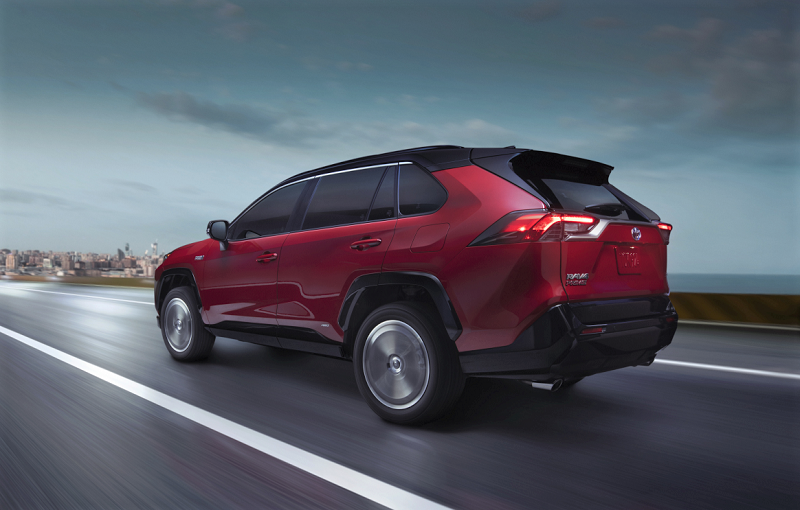 Engineered Prime for the performance-oriented driver, the 2021 RAV4 Prime is being offered in the sporty SE and XSE grades.

The SE shows its sporty attitude through its 18-in. painted and machined alloy wheels and an exclusive front grille design and front lower spoiler. Piano black exterior accents and a painted grille/diffuser complete the premium look. 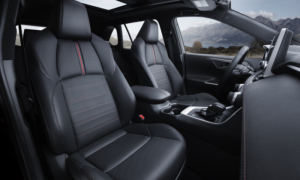 Like the current RAV4 Hybrid XSE, the Prime version of this grade stands apart with a two-tone exterior paint scheme pairing a black roof with select colors, including the striking new-to-RAV4 Supersonic Red. 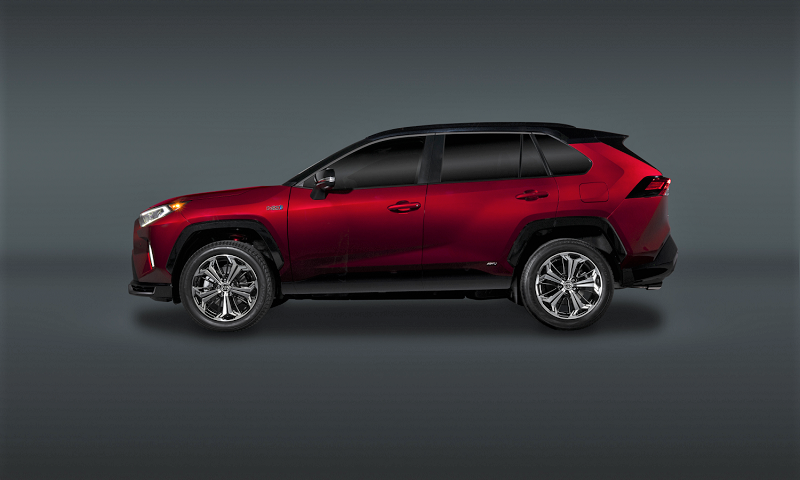 Exclusive 19-in. alloy wheels with a unique two-tone design, are the largest ever offered on a hybrid RAV4, Vertical LED accent lights give the XSE a distinct look, while the optional Adaptive Front Lighting System (AFS) with headlamp auto-leveling partially aims the beams into turns as the driver steers. 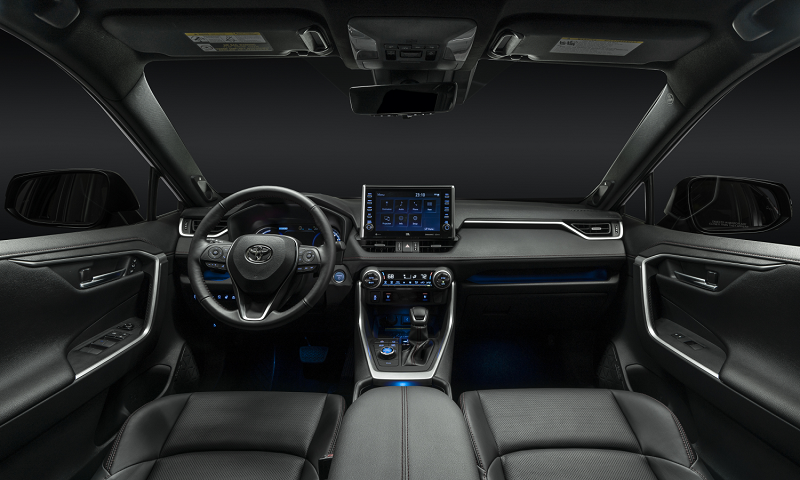 Toyota hybrids for years have delivered high performance with low fuel consumption, and the 2021 RAV4 Prime is engineered to be the strongest yet.

Using a differently tuned version of the RAV4 Hybrid’s 2.5-liter four-cylinder Atkinson-cycle gas engine, RAV4 Prime produces the same projected 176 hp as in the hybrid. Pairing it with the electric motors, the total system output is a whopping 302 horsepower.

It’s larger Lithium-Ion battery, mounted under the floor, does not take away from RAV4 Prime’s passenger and cargo spaces.  In fact, the mounting position also gives the RAV4 Prime a low center of gravity and enhanced driving stability.

An enhanced heat pump HVAC system, based on the Prius Prime system and tailored to fit RAV4 Prime, contributes to its increased EV range by reducing energy consumption for cabin temperature control.

The RAV4 Prime employs the same version of Electronic On-Demand All-Wheel Drive (AWD) as the RAV4 Hybrid. In both models, a separate rear-mounted electric motor powers the rear wheels when needed, including proactively on acceleration startup and also in reduced-traction conditions.

The AWD system also reduces understeer during cornering for enhanced steering stability. Off-pavement, AWD enhances hill-climbing performance. A driver-selectable Trail mode makes it possible to get unstuck by braking a spinning wheel and sending torque to the grounded wheel.

Using the available paddle shifters, the driver can “downshift” to increase the regenerative braking in steps, which fosters greater control when driving in hilly areas, for example.

The innovative Predictive Efficient Drive feature acts like an invisible “hyper-miler” co-driver. Using the available navigation system, Predictive Efficient Drive essentially reads the road and learns driver patterns to optimize hybrid battery charging and discharging operations based on driving conditions. The system accumulates data as the vehicle is driven and “remembers” road features such as hills and stoplights and adjusts the hybrid powertrain operation to maximize efficiency.

As with all Toyota RAV4 models, the RAV4 Prime comes equipped with standard Toyota Safety Sense (TSS 2.0), that includes a long roster of active-safety technologies and capabilities:

Starting with the 2020 model year, every Toyota Hybrid Battery Warranty has been increased from 8 years or 100,000 miles to 10 years from original date of first use, or 150,000 miles, whichever comes first.

Pricing and additional details will be made available closer to launch.  When it is, we will share it with you at inwheeltime.com.

2017 Toyota RAV4 SE Hybrid AWD is the pick of the litter!