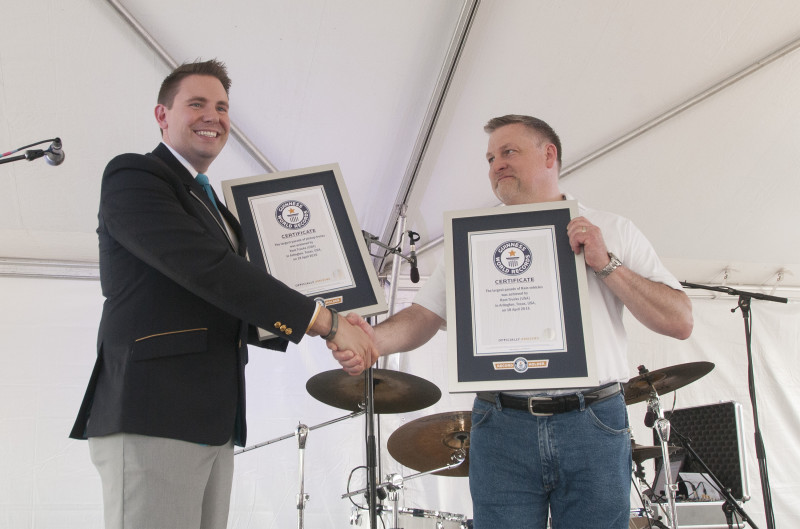 Arlington, TX – Ram truck owners from seven U.S states and Canada showed up to help the Ram Truck brand set a new GUINNESS WORLD RECORDS™ title for the largest parade ingof pickup trucks on Saturday, April 18, in Arlington, Texas. There were 451 Ram trucks participating in the “Ram Truck Round-up,” breaking the previous world record of  438 trucks.Ram, the “Official Truck” of the Academy of Country Music Awards, had invited its customers to help break the GUINNESS WORLD RECORDS in honor the 50th anniversary of the ACM Awards, which was broadcast live for the first time ever from AT&T Stadium in Arlington, Texas, Sunday, April 19, 2015, on the CBS Television Network.“Our hard-working Ram truck owners are passionate and loyal, and today they proved once again that everything is always bigger in Texas,” said Robert Hegbloom, President and Chief Executive Officer, Ram Truck Brand, FCA – North America. “Ram is the fastest growing truck brand in Texas, where trucks are king, and it was great to see 451 Ram owners travel far and wide for this once-in-a-lifetime opportunity to be a part of a special record-breaking rally and pickup parade.” 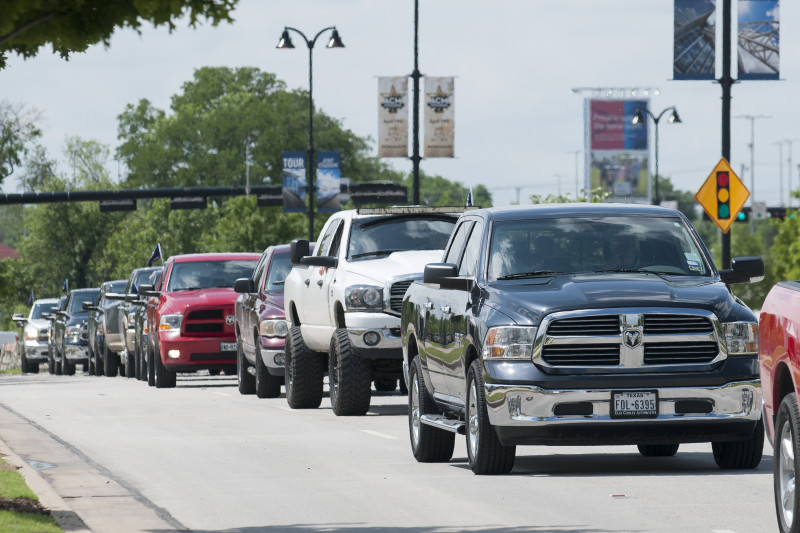 The Ram Truck Round-up parade route started on the east side of AT&T Stadium in Arlington and traveled approximately 3.2 miles around the stadium and neighboring Globe Life Park grounds.Participants in the Ram Truck Round-up parade were treated to a special morning of activities including car-crushing appearances by the Raminator monster truck, music performances by the Austin, Texas-based Midnight Social, appearances by country music artists Kix Brooks, Thomas Rhett and Easton Corbin, and giveaways from Ram brand partners.  Participants also received free tickets for the ACM Party for a Cause Festival, taking place at Globe Life Park.

Ram Trucks in Texas Facts
More Texans drive pickup trucks than any other state (20 percent of motor vehicle registrations versus 12 percent national average) and Ram is the fastest growing truck brand in Texas. Ram’s current market share of 20 percent has risen 2.52 points (15 percent) in the past five years and the brand sells two-and-a-half times as many pickup trucks in Texas as it does in the next highest volume state.

ACM Party for a Cause Festival
Ram Truck Round-up participants received tickets for Saturday’s ACM Party for a Cause Festival. The two-day outdoor music event, taking place Friday, April 17, and Saturday, April 18, at Globe Life Park in Arlington, which included multiple stages for ongoing live country music performances, interactive experiences, a family-friendly country marketplace with vendors from around the country and much more. Country music icons, including many 2015 ACM Award nominees, were set to perform. The festival was also taped for a two-hour special “ACM Presents: Superstar Duets!,” which will air on Friday, May 15, on CBS. Additional information on the event is available at ACMcountry.com.