Mopar reinforces the street and off-road personalities of popular Ram 1500 trucks with two unique custom concepts that will debut at the 2018 SEMA (Specialty Equipment Market Association) Show in Las Vegas this month.

The two modified Ram 1500 trucks, customized with a combination of Mopar production and prototype parts and accessories, are two of 14 personalized rides, as well as hundreds of Mopar products, that will be on display in the brand’s 15,345-square-foot exhibit in the Las Vegas Convention Center.

“The SEMA Show is truly the greatest stage for our brand to demonstrate what owners and enthusiasts can create with a little imagination and a selection of Mopar parts and accessories,” said Steve Beahm, Head of Parts & Service (Mopar) and Passenger Car Brands, FCA – North America. “There is a method to our SEMA madness — we use this show as a venue to gauge enthusiast interest in prototype parts that may become production offerings in the future.”

The Ram 1500 Rebel was a perfect choice for the Mopar team to showcase both standard and selected Mopar accessory parts that both highlight and augment the rugged off-road personality of the Ram 1500 Rebel.

To do so, Mopar started by creating a custom neutral blue – called ‘Rebel Smoke’ – for the exterior of this Ram 1500 Rebel concept.

Enhancing its off-road prowess is a Mopar lift kit that raises the Ram two inches for additional off-road clearance. Single-piece cast-aluminum black Mopar off-road running boards make getting in and out of the higher Ram Rebel easier. 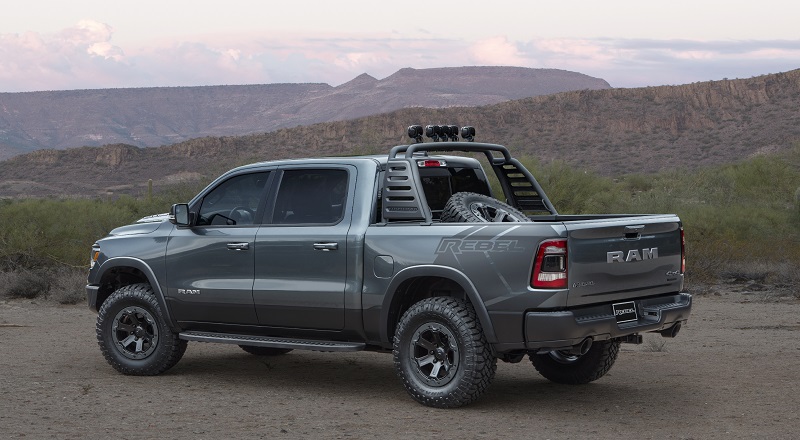 All of the Ram 1500 Rebel concept badging is in Grey Metallic. 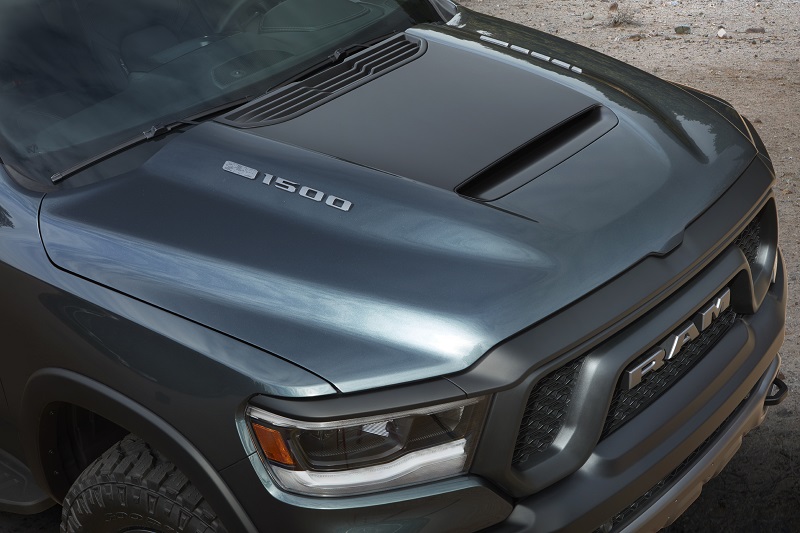 On the inside, both soft and hard interior trim are black monochromatic look instead of the standard red anodized Rebel trim. Other Mopar accessories completing the interior include all-weather mats, brushed and polished door sill guards with the R-A-M logo, wireless charging and a conceptual pedal kit. 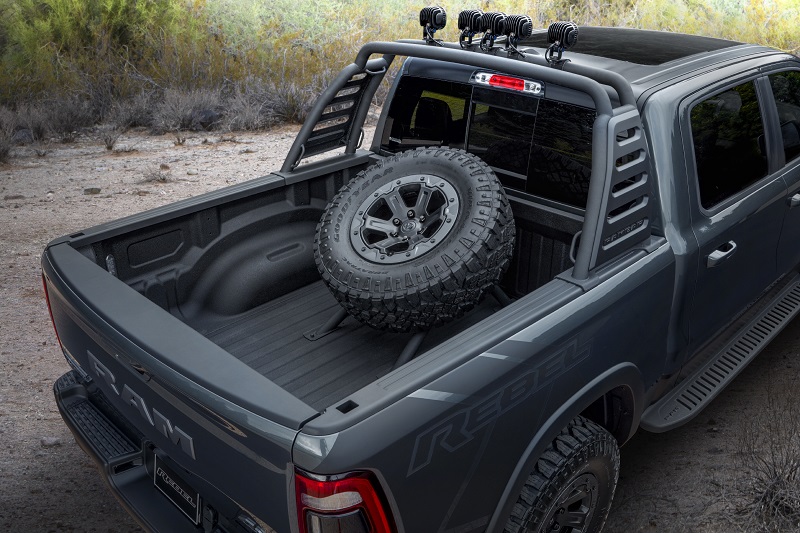 The Low Down Big Horn Concept from Ram

The second truck from Ram is a Mopar-modified Big Horn Low Down that boasts what they say is a ‘slammed-to-the-street style’ augmented with unique and clean exterior flourishes.

Taking the Ram 1500 Big Horn, the Mopar Low Down features a custom (they call it) Brassphault color palette.  The upper body is a custom Gloss Black – including the Mopar conceptual performance hood.  The lower body is Billet Silver.  A narrow Brass Monkey stripe accents the color combination as its wraps around the Ram – dividing the colors.

For a subtle finish, all of the Ram and Big Horn exterior badging is in Gloss Black.

The ‘slammed-to-the-street- effect is achieved on the Ram 1500 Low Down by dropping it two inches closer to the street using a prototype lowering kit.

Other custom features on the Low Down are a one-piece Mopar hard tonneau cover body color Gloss Black along with 5-inch exhaust tips also in Gloss Black. 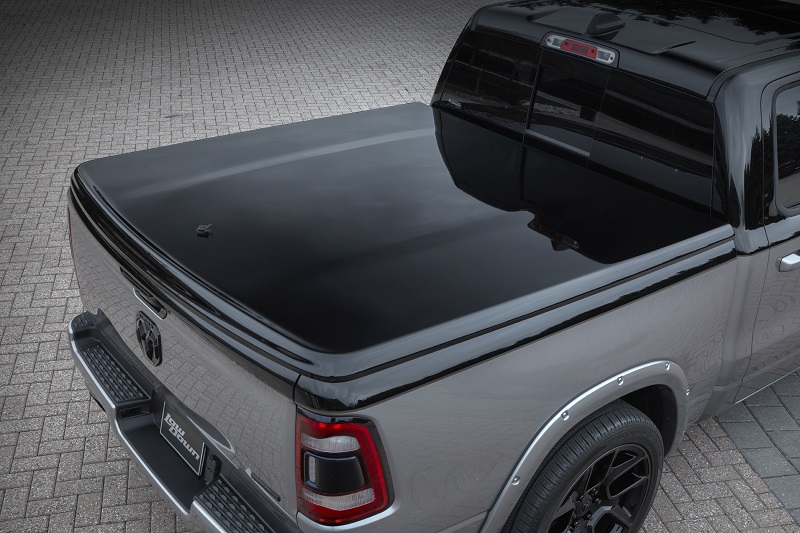 On the inside, Mopar accessories include Mopar all-weather mats, brushed and polished door sill guards with the R-A-M logo and conceptual bright pedal kits.

Under the performance hood, the Ram 1500 Big Horn Low Down is powered by a 5.7-liter HEMI engine that is boosted with a Mopar Ram Airflow cold-air intake system featuring the R-A-M logo molded at the front. 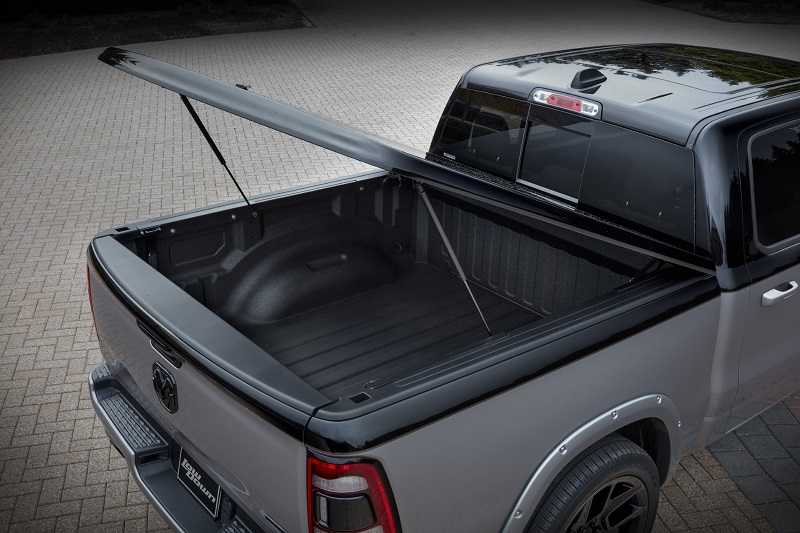 Mopar at 2018 SEMA Show
The Mopar brand SEMA Show exhibit will also feature off-road flavor with a special section devoted to four Jeep vehicles customized with new Jeep Performance Parts and accessories that debuted at the SEMA Show in 2017.

And, for those attending, there will be an opportunity to go head-to-head in a pair of Dodge Challenger SRT Demon simulators and compete in the Drag Strip Showdown contest.  The top four drivers with the best simulator race times will win a trip to the Dodge//SRT Bondurant Drag Racing School near Phoenix

About Mopar
Mopar is the service, parts and customer-care brand for FCA vehicles worldwide. In the US, Mopar is the source for genuine parts and accessories for all FCA vehicle brands. Mopar parts are engineered together with the same teams that create factory-authorized specifications for FCA vehicles – a direct connection that no other aftermarket parts company can provide.

Complete information on the Mopar brand is available here:  https://www.mopar.com/en-us.html